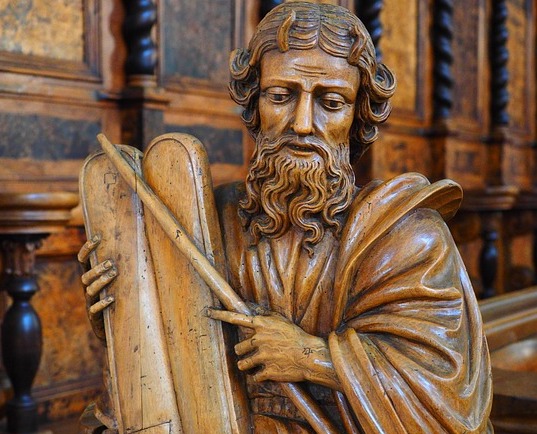 The Transforming Power of the Holy Spirit

We are sort of in a calm in the middle of the storm today in this part of the passage. While there are some significant things that happen, they are not the earth shattering events that occur on either side of this part of the passage. But there is some information contained in this passage that is what I would consider solid gold where it regards instruction for the pulpit ministry of a church.

[box] This passage clearly shows the difference that it makes when the Holy Spirit is leading the way into a situation. It shows what it looks like when someone preaches in power and what it sounds like for those with ears to hear.[/box]As a musician, I am a person who loves to listen to music. I listen to all kinds–anything from Classical to Rock is in my own personal collection. I had an experience recently with listening that I think ties in well here. I would not call myself a giant fan of the music of Led Zeppelin. I am a marginal fan, so don’t consider this an endorsement of any kind. They leave a lot to be desired with their theology for sure.

But I read with great interest the other day, that they were releasing high definition audio files of their entire catalog. So being a fan of high def audio, I decided to check these out. I have recently gotten some pretty good gear to sit at my desk and listen to these sorts of things with. I will pretty much listen to anyone if they have these high def files of their music.  So I listened to a few samples of the songs on the web site. I was, frankly, pretty disappointed. Because this band was popular in the 70’s for the most part, their recordings are stuck there in terms of quality as well. There was a fair amount of distortion and just generally poor quality recording in general. I would not be buying these tracks to listen critically to. They may be OK going down the road with the wind in your ears, but not for critical headphones like the ones I have.

On the other hand, we were recently at the Woodlands pavillion and heard a band that was formed by the son of the late drummer for Led Zeppelin. In order to pay tribute to his father, they attempted to recreate their music live, and they did a fantastic job!  Further, the sound system at the Pavillon, if you have ever been there, is state of the art. The live version of these songs was powerful, and interesting, and very well done. These songs came alive in the live setting when performed well.

The same thing is true of the first sermon of the Apostle Peter that we have recorded for us here in Acts chapter two today. Peter was not what many of us would consider ‘elder’ material. He was a simple fisherman, who didn’t have education, and he was a hot head to boot. But today, when he stands under the power and influence of the Holy Spirit which had just been rained down on this group of people, his words had the effect of causing 3,000 people to put their faith in Christ.

[box] Just as this music went from bland to great with the right sound gear, so Peter’s influence went from good to great with the infusion of the Holy Spirit. We are going to be amazed the see the transformation from fisherman to ‘fisher of men’ by the Apostle Peter.[/box]

The Birth of a Preacher

14 But Peter, standing with the eleven,

It says, about Peter, that he stood. The eleven were with him, they were all present, but Peter took the lead. And why was this? He was possibly one of the least educated persons present. He was a Galilean. And remember earlier in chapter two, that there were men who were essentially insulting the Galileans and hinting that they were uneducated.  Aren’t these men Galileans? Aren’t they fishermen? Aren’t they lacking in education? This was the question being asked. And Peter was one of them. He was a guy who made his living by catching fish and selling them. He was emotional and impetuous. At the arrest of Jesus, he took a sword and cut off the ear of one of the men present who came to arrest Jesus. Jesus in fact rebuked him — not only there but at other times as well. Peter was the one who denied the Lord three times at his arrest and trial.

Peter ~ From Fisherman to Fisher of Men…

Now, Peter is the one who stood.

In the book of John chapter 21, a story is recorded of a conversation between Jesus and Peter. Christ asks Peter three separate times, “Do you love me?” Each time, Peter begins to be more and more heart broken, because he remembers that he had denied the Lord. He says to Jesus, “Lord you know that I love you.” And Jesus replies each time, “Feed my sheep. Feed my lambs.” He finishes up saying, “Follow me.” Jesus was urging Peter into service like only he could. Peter was told to follow Jesus and to feed his lambs. And so today, it begins.

I can just imagine Peter feeling as if he was sitting on pins and needles. When the time came for him to speak, he practically jumped from his seat in order to make sure that no one else got in front of him.

[box] Peter was made ready for this moment by Jesus’ words to him, and it didn’t take a college degree. Peter didn’t need to be a doctor like Luke was. He needed only to act on the fire that burned inside of him at this point. He had received a seminary degree from God in the flesh, and it was time to put it to use.[/box]

If You Believe You’re Called to Preach…

Don’t think for a moment that Peter was unprepared. This is not an endorsement for someone to begin to preach without preparing first. He was prepared intensely for three years prior to this. He was ready for this moment and he wasn’t going to miss it.

If you are here this morning and sense that God may be calling you to serve the church in some fashion, let me, first of all, say that there is hardly anything that could be more thrilling for your pastors than for God to call people to ministry from our congregation. We would be so humbled, if God called pastors and missionaries from this group of folks. If you sense that God could be working in your life perhaps to preach one day, you will need a few things before that time.

Before you begin preaching, you need…

Prayer ~ You need prayer — notice in the first part of the book of Acts that they devoted themselves to prayer. This was not entered into lightly.

Preparation ~ You need preparation. Just because people thought Peter was uneducated doesn’t mean that he was in fact. He had been prepared by Christ for this moment. You can’t get a much better degree program than Peter had.

Notice in Acts chapter six what is said:

The twelve devoted themselves entirely to preparing for what they were called to do. They practiced their craft in order to perfect it. If God moves in your life in such a fashion, talk to one of your pastors. We would absolutely love to be able to guide you further in that!

To be continued with “A Blueprint for Sermons”