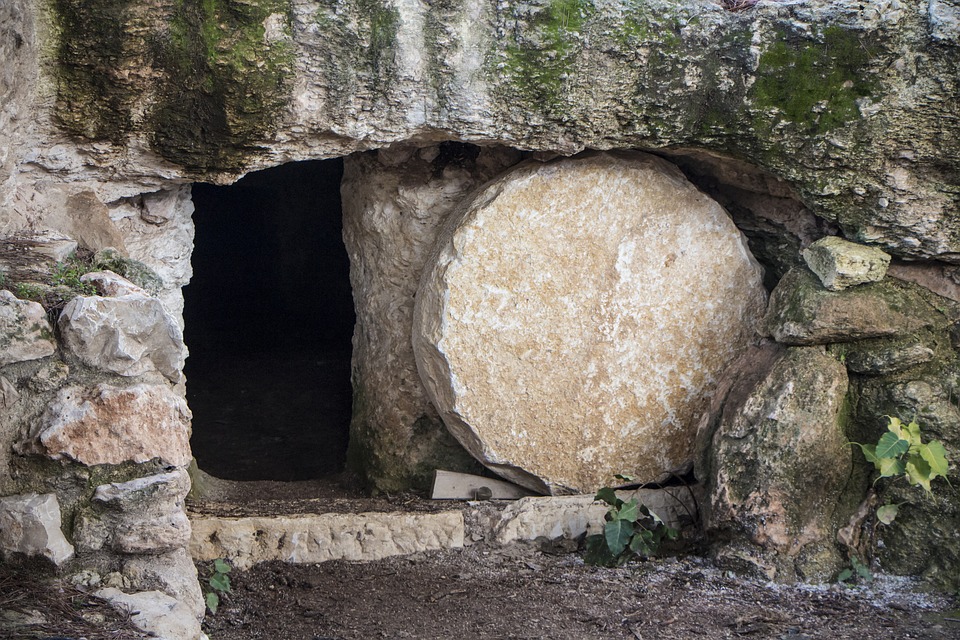 Continued from ‘Proclaiming the Gospel Message’…

The Resurrection of Christ

God raised him up, loosing the pangs of death, because it was not possible for him to be held by it. For David says concerning him, “I saw the Lord always before me, for he is at my right hand that I may not be shaken; therefore my heart was glad, and my tongue rejoiced; my flesh also will dwell in hope. For you will not abandon my soul to Hades, or let your Holy One see corruption. You have made known to me the paths of life; you will make me full of gladness with your presence.”

Brothers, I may say to you with confidence about the patriarch David that he both died and was buried, and his tomb is with us to this day. Being therefore a prophet, and knowing that God had sworn with an oath to him that he would set one of his descendants on his throne, he foresaw and spoke about the resurrection of the Christ, that he was not abandoned to Hades, nor did his flesh see corruption. This Jesus God raised up, and of that we all are witnesses. Acts 2:24-32

True Kerygma, the entire gospel message, will always include the resurrection of Christ.

Paul said about the resurrection,

“But if there is no resurrection of the dead, then not even Christ has been raised. And if Christ has not been raised, then our preaching (kerygma) is in vain and your faith is in vain…. If in Christ we have hope in this life only, we are of all people most to be pitied.” 1 Corinthians 15:13-19

In the passage for today, Peter, again, makes his appeal to prophecy. This time, it is a Psalm of David–Psalm 16. Even though David is talking about himself, the fulfillment of this prophecy is in Christ, and Peter wants to be careful to make sure that this audience knows that. The point he makes here is that David is dead.

He says, “We know where David is buried, he is right here with us. But Jesus the Messiah is very much alive.” You have at least 120 people present, right now in this place who witnessed him alive. If you want proof, we will all testify to the truth of that.”

God was not going to allow Jesus to continue in the grave, because he would have essentially been unjust in allowing that. Here is what I mean by that. When sin entered into the world through Adam, the penalty for that sin was physical death. So death continued for each person born after that time. Every time someone died, it was because of the curse for our sins.

Death ~ An Unjust Penalty for a Sinless Life

But now we have the God-man, Jesus Christ, who lived this life in sinless perfection. He was not subject to the curse. Jesus never once sinned as humans do. He maintained a perfect record of keeping the law and avoiding transgressions. If God kept Jesus in his grave, God would in essence be assessing a penalty on Jesus that was not his responsibility to pay.

How could God be just and punish Christ by not raising him? He couldn’t. The penalty of death is for the rest of mankind but not for Christ. God, in essence, was obligated to raise Christ. The Holy Spirit prophesied through the mouth of David, some 1000 years before hand, that he would not let his Holy One see corruption.

“I will not let my son rot and decay in the grave, but will raise him again.” Once again, this is more than just the fact that Jesus was never supposed to stay in the grave. The resurrection is proof of the truth of his claims. [box] This power over death that was exhibited here gives another guarantee to those who are believers. This guarantee is that we will also be raised again to life at some point future. There will come a day when every single soul who dies in Christ will be raised imperishable. We will go and be with Jesus in paradise, and this will be our permanent forever home after this.[/box]

If Christ was not raised to life by God, then we would have no hope of ever being raised ourselves. The resurrection is our guarantee that these things are true. The greatest single proof that God accepted the sacrifice of Jesus on the cross is the fact that he raised him. If he was still in the grave, he would be just another martyr. But the fact that he is risen points to the fact that his work on our behalf was pleasing in God’s sight.

Death was powerless to hold Christ for several reasons.

First, death could not hold him because of his divine power.  Hebrews 2:14 says of him:
“Since therefore the children share in flesh and blood, he himself likewise partook of the same things, that through death he might destroy the one who has the power of death, that is, the devil.”

Second, death could not hold him because of his divine promise. John 2 says: So the Jews said to him, “What sign do you show us for doing these things?”  Jesus answered them, “Destroy this temple, and in three days I will raise it up.” The Jews then said, “It has taken forty- six years to build this temple, and will you raise it up in three days?” But he was speaking about the temple of his body. When therefore he was raised from the dead, his disciples remembered that he had said this, and they believed the Scripture and the word that Jesus had spoken. John 2:18-22  Jesus made a promise to his disciples that he would be raised — and he made good on that promise.

Third, death could not hold him because of his divine purpose. God had determined that his people will be with him through all eternity. It was necessary that Jesus prepare that way for them.  John 14:19 says: Yet a little while and the world will see me no more, but you will see me. Because I live, you also will live. There is a very interesting and controversial service that is offered for the very rich among us. For a fee of between $12,000 and $36,000 dollars, you can be frozen after you are dead in the hopes that future generations could bring you back to life.  Perhaps they will find a cure for the thing that killed you and bring you back and cure it. There are about 250 persons in cryo-preservation as of a few years ago in the US. Even though there were rumors that Walt Disney was one of those, he was actually, officially cremated, and his ashes were scattered.

But science has not found a way to reanimate tissue that has died. Once you’re dead, you’re dead. There currently exists no way to reanimate the ones who have been preserved in this fashion. Only God has the power over death. And so those who were dead and then later were up walking around again like Lazarus owe it all entirely to God. But even Lazarus, unfortunately for him, died twice — how is that for a bummer? He is still in the grave. The Significance of the Resurrection

Only Christ was raised for good, and because of this, his resurrection now stands to do a few things:

Those are some pretty powerful effects of the resurrection!  It must be included, if we will preach with power the pure gospel message. This is an essential part of the Kerygma. The Significance of the Exaltation of Christ

Finally, today in verse 33, we see the last piece of the puzzle. This is the exaltation of Christ. Look there at verse 33:

Being therefore exalted at the right hand of God, and having received from the Father the promise of the Holy Spirit, he has poured out this that you yourselves are seeing and hearing. For David did not ascend into the heavens, but he himself says, “The Lord said to my Lord, “Sit at my right hand until I make your enemies your footstool.  Let all the house of Israel therefore know for certain that God has made him both Lord and Christ, this Jesus whom you crucified.” Acts 2:33-34

Peter finishes this section with another reference to prophecy. Psalm 110 is quoted in this section.

‘Sit at my right hand.’–A place of exaltation.  Philippians chapter 2 speaks of the fact that coming to earth meant humiliation for Jesus. He humbled himself and became obedient unto death — even death on a criminal’s cross. Now he is risen and exalted to his rightful place in the universe. Peter nails the final nail here  by telling his audience that Jesus is both Lord and Christ. This guy from Nazareth was THE guy, and you missed it, because you took him and crucified him.

Now again just as another sort of cliff hanger for next week’s sermon, I want to read their initial response to you. It says in verse 37 just following this:

Now when they heard this they were cut to the heart, and said to Peter and the rest of the apostles, “Brothers, what shall we do?” Acts 2:37

Watch the sermon below to hear the entire message.